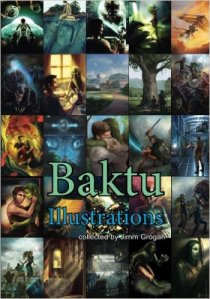 Happily, there is even more great news to share about Baktu! Cass here at the blog helm again, checking to inform you of the latest developments about the printing of the book and distribution on Amazon.

As those who purchased early copies of book two in the Tomek series will know, the novel contains beautiful illustrations from contest winning artists, sourced from around the world. As he shared the novel with others Jimm learned personally of Baktu collaborators and fans of the written word who wanted to badly to see the original versions, that he pulled the trigger on an accompanying printed graphic which is just now available to the public, also on Amazon.

Due to the cost of full color publication of the entire epic, the artwork had to be printed in black and white throughout. As you experience the image in only the form of light and shadow, it gives the drawings within the full length novel a nostalgic and dream like quality. Each visual likeness leaves your imagination to explore and envision the colors, hues, and contrast of every depicted scene. This difficult choice to remove color from the pages was done with the purpose to make the book more economically priced and therefore accessible to more readers.

After seeing full novel in print, Jimm knew he wasn’t quite done sharing the diversity of talented artists who had contributed to the novel. It then also became of high importance to Jimm, as he progressed through the project, that the audience be given the opportunity to enjoy the full beauty of the different graphic styles of the artwork in high resolution full color.

Personally, it is such a treat to see both the black and white, as well as the full color side by side as I read the novel again. Sometimes my imagination closely matched the artist’s rendering, and other times I was delighted to see that the artist had chosen nearly the opposite colors to what sprang from my imagination.

In the full novel your imagination really makes the drawings your own as your mind’s eye fills in the details between light and dark – whereas the stunning high-resolution drawings provide every detail and some surprises as to the artist’s interpretation of the story. The full novel and the special edition collection of color illustrations are complimentary books, and make a beautiful set for avid readers and science fiction fans of all ages! In this newest release of the drawings accompanied by a short blurb about each artist, you may find yourself lost in the soulful pictures, and dreaming up the prequel as well as back story for Wra, Spri, and the other natives of Baktu.

After you’ve enjoyed them both, please feel free to leave your comments or questions for the author about both the story and illustrations here! I’ll be back with you to share the next developments for the Tomek series! Thank you again to all the fans for your support and interest. Your continued curiosity and compliments have been a joy for everyone who contributed to the project, and especially for those artists who thanks to Jimm are able to bring the adventures of Tomek to both the digital and print world in black and white and brilliant color! Thank you! 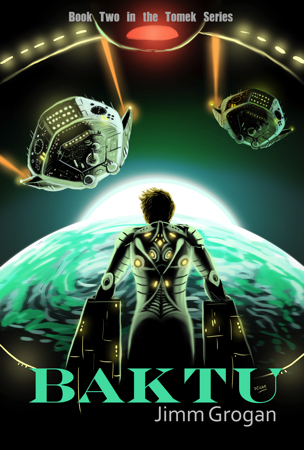 Baktu, the second science fiction novella in the Tomek series.

Hi Everyone! Cass here again, guest blogger, with the pleasure of sharing the first official flames of attention for Baktu! As you know Jim’s book is complete, has now also gone through the sometimes complex editing process, and as the publishing date approaches, more and more good news for fans of the series keeps coming out!

Just this week Baktu was awarded admittance into Amazon’s Kindle Scout competition for unpublished manuscripts. You the reader directly benefit in this unique competition, because as part of the program, Amazon allows you to check out the first few chapters and nominate Baktu for publishing through the competition, for free. As well as another benefit after the competition concludes.

Starting today you will have a full month to check out Baktu’s opening section, nominate it for publishing, and share it with anyone – for free!

After that, and with the most nominations in this competition group, their program additionally rewards those readers who nominated Baktu by providing each of you a complimentary Kindle eBook edition of the entire book to keep!

Please do support the continuation of this fun sci-fi series by enjoying Amazon’s advance preview and offering Baktu your publication nomination after you have taken pleasure in the exhilarating opening scenes and developing story! When Baktu moved onto the next stage your participation at this early stage guarantees you a complimentary copy of the full novel as soon as it’s released by Amazon!

The anticipation of Tomek’s landing, at the outset of Baktu, and escape from the dangerous powers in the previous novel, Negative Zero, are only the first mysteries revealed to readers who take advantage of Amazon Kindle’s sneak peak. You will soon be lost in this fascinating world that is both totally alien and not all that much unlike our own world. If only we had the intergalactic travel, Baktu would definitely be a must see destination.

It has been noted that along with the book’s cover, a large part of Tomek’s journey includes the mysterious illustrations always intended for inclusions the final print publication. Amazon’s Scout competition, however, only allows for the novel’s cover and text to be reviewed and nominated. But, we are glad to report that after winning, when published and sent by Amazon to all those who nominated it, we can confirm that Baktu’s eBook will definitely include the full set of color illustrations!

This is a really great opportunity and deeply appreciated honor for Baktu to have met their standards for publication and to have gained immediate admittance into the active competition. We invite you to please visit Baktu on Amazon’s contest page, enjoy the sneak peek, and give Baktu your nomination! Please do also share the experience of your reading it with everyone you know and also with Jim directly here on the site!

Steal a Look into Baktu’s Story of Struggle and Discovery

Hi fans! Cass here, guest blogger for Baktu’s approaching release date! I’ve been given a pre-published glimpse of the upcoming novel Baktu, and although I can’t give away any details, I can say you won’t be able to put it down once you start reading!

Both existing fans and new readers will love this great continuation and development of an epic space-adventure in the sequel novel, Baktu. Following the success of his first novel Negative Zero, author Jim Grogan knew the characters and story would continue greatly inspire and also reach more readers, so he set out to develop this next installment.

Although set on another world far from earth, Baktu deeply hits home for earthly every person, as each man, woman, and child has their own life story of challenge, connection, discovery, and breakthrough. The main character, an inventive, handsome, and somewhat rebellious engineer and pilot, Tomek, begins the prologue and carries forward in this second novel as the author’s point of view for the opening sections of the book.

Tomek’s nonconformist nature is highlighted several times in the opening scenes, as he must chose to decide, under pressure and in the moment, if he is to abide by the standards and rules of others, or if he will risk the possibly disastrous and deadly consequences to control his own destiny. Is begs the question then to any reader, if you were Tomek, what would you do? Although none of us will be flying a spaceship any time soon, everyone can imagine a situation in their lives where they had to either rely on the roles and information given to us from others, or to make up the rules, information, and decisions to carve our own path through space and time.

As with Tomek, there is an explorer living deep inside many of us. It may be a desire to explore space, like Tomek, or science, electronics or art and music. This sequel, Baktu, brings to each person the chance to model their struggle through the experience of Tomek, and other characters introduced throughout the novel. In this installment, Tomek’s purpose is in conflict. He has a burning personal desire to explore, understand, and connect with the planet’s range of live and resources, but also he must not become distracted from his direct purpose, of finding and saving someone close to him from life threatening danger. He hopes something or someone on the planet has the clues he needs, but being the alien on a foreign planet presents unique tests and problems he must resolve to understand and benefit from the world around him.

Although Tomek feels welcomed by the inhabitants, and relatively safe (if not for the planet’s strange beasts that are allowed to roam free and sometimes even bred for their brute strength), he does feel that they aren’t truly open to him. He has been very plain and open in his quest for clues or direct information, and even with the connections that he might now regard as friends, it is clear there are some things that they keep to themselves. He senses no malice or trouble from them, just a distance that he cannot possibly explain as the secret might be any of the many odd occurrences he has encountered so far.

You should read this book for several reasons. I’ve only got space to list a few of them here, but trust me on this and you’ll enjoy the rewards both during and after completing Baktu. First, the characters are the kinds of people we would all want in our own lives, either at home or while on an epic space adventure. They’re honest, supportive, not limiting and each have an adventurous spirit in their own way. Second, as I’ve said before, each of us has some personal or career struggle that seems impossible or hopeless, and through Tomek’s journey we see how his ingenuity and unwillingness to give up, eventually to resolve his problems or lead to the next step in resolving his problems. We could all use a great example like him in times of trouble or in those moments of helplessness. Third, but perhaps most importantly, the combination of the story and the characters are great role models for readers of any age. Parents can be assured that young adults are being exposed to material that will grow their belief in their own ability to create and succeed, and might only have to worry that they’ll take the book to enjoy and read themselves!

Adult readers will find clearly presented and relevant issues and themes hidden in this fiction novel, which connect with every aspect of the reader’s life. Pursuing your own personal interests, while also fitting into a known (or in Tomek’s case unknown) society is a struggle for anyone. Starting a new job, moving to a new town or country, or in the case of Tomek, having landed on another planet is bound to the start of an eye opening adventure. Although the reader is quickly presented with new species, words, and customs, the themes and challenges in the opening chapters are universal, and quickly pull your attention along into the next scene.

As I was enjoying the unfolding story, wondering how and where it would take me to finally discover the upcoming action-packed climax, as I was becoming attached to Tomek’s journey and discoveries, and also pondering what the outcome of their latest troubles might be, my sneak peek abruptly ended. Had it been a scrolling single sheet of real paper it would have shot out of my hands like paper streamers. I hope to have another update for your reading pleasure very soon and giving you the latest on Tomek’s progress!